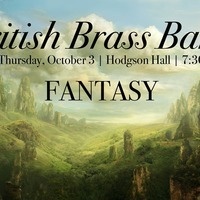 The theme for the UGA British Brass Band’s Fall Concert will revolve around "FANTASY." The band will be performing Sir Malcolm Arnold’s Fantasy for Brass Band, as well as the World Premiere of Starboardfor Brass Band, composed by horn professor James Naigus. Come and hear the music of Bruce Broughton, one of Hollywood’s prolific composers of movie and TV soundtracks, as the band performs his Harlequin, Music from Tombstone, and The Good Old Way. This will be a precursor to the HWE’s upcoming performance of Broughton’s new work for trombone, featuring NY Philharmonic principal trombonist Joseph Alessi.

They are directed by trumpet professor and the William F. and Pamela P. Prokasy Professor in the Arts, Philip Smith. The concert is presented free of admission For those unable to attend this event, the concert will be streamed at music.uga.edu/live-streaming.