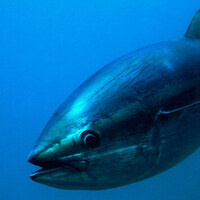 Screening and Discussion: Bluefin: The Last of the Giants

Bluefin: The Last of the Giants is a tale about the most magnificent and powerful fish on the planet. Off the coast of Canada, the giant Bluefin tuna disappeared after years of overfishing, only to return recently in huge numbers. But something is wrong. Once wary of humans, they are now seemingly unafraid. What has happened to this majestic creature and its habitat? Have these endangered tuna stocks suddenly recovered as the fishermen claim? Or are we actually hunting down the last of them as scientists claim? With stunning cinematography, the film unravels this mystery about a broken ocean ecosystem.

Discussion led by Duncan Elkins in the Odum School of Ecology.

Sponsored by Speak Out for Species and the UGA Office of Sustainability as part of the Animal Voices Film Festival.