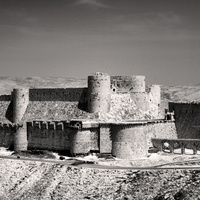 Exhibition: Before the War: Photographs of Syria by Peter Aaron

In 2009, Peter Aaron traveled with his family to Syria. Aaron spent his trip photographing city streets and sites in and around Syria, such as the desert city of Palmyra or Krac de Chevaliers, the largest fortified castle built by the crusaders. Two years after his trip, civil war broke out in Syria, and since then, many of the monuments in these photographs have been destroyed. This exhibition will include images from Aaron’s book “Syria: Before the Deluge,” which contains photographs from his trip.