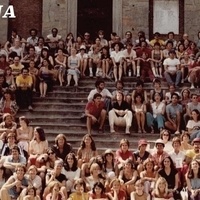 In 1970, the University of Georgia Studies Abroad Program in Cortona (UGA Cortona) was initiated. The vision and devoted efforts of founder and director, John D. Kehoe, rooted UGA’s presence in Cortona. Together with city officials of Cortona, the relationship between UGA and Cortona has since transcended the moniker of “Study Abroad”, achieving a cultural, social, and human understanding between two cities and their people. The Baci from Cortona project comes to fruition, only thanks to 50 years of continuous friendship, inclusion, and cultural exchange. Collaborative efforts from UGA Cortona, Cortona on the Move and its partners, attempt to unfold the stories of so many lives touched by the relationship between the city of Cortona and the University of Georgia. The exhibit conveys passion and sincerity through images created by the Cortona and UGA communities. An open call solicited the submission of photographs expressing memories, relationships, and experiences resulting from the wonderfully human interaction between two cultures. What has emerged is not simply a walk down memory lane but something far more significant; the compilation of images reveals the enriching impact of a 50-year old relationship, cultivating lifelong friendships and learning opportunities. Observing this 50th anniversary, Baci from Cortona intrinsically speaks to the past and future connections between the UGA and Cortona. Stories represented by the exhibition have transpired over 50 years with anticipation for continued growth and evolution between the city of Cortona and the University of Georgia, for many generations to come.