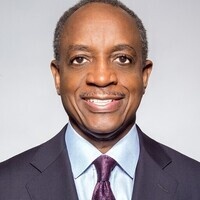 DeKalb County CEO and Athens historian Michael L. Thurmond will discuss his book A Story Untold: Black Men and Women in Athens History, updated and re-released in 2019, 40 years after its original publication.

Thurmond has served as chief executive officer of DeKalb County, one of the most diverse counties in the Southeast, since January 2017. Thurmond is widely regarded as a “turnaround expert” after fundamentally transforming the culture and enhancing operations of complex organizations such as the Georgia Division of Family and Children Services, the Georgia Department of Labor and the DeKalb County School District.

Thurmond, a sharecropper's son, holds a Bachelor of Arts in philosophy and religion from Paine College and a Juris Doctor degree from the University of South Carolina’s School of Law. He also completed the Political Executives program at the John F. Kennedy School of Government at Harvard University. In 1986, he became the first African-American elected to the Georgia General Assembly from Clarke County since Reconstruction.

Thurmond received a gubernatorial appointment to lead the state Division of Family and Children Services and directed Georgia's historic transition from welfare to work. In 1998, Thurmond was elected Georgia labor commissioner, where he served for three terms.